CT Author Cup closes the whole Author Marathon Tour series and is also one of the most watched domestic cycling events. Track with a length of 63 km and an elevation of 1546 meters promises a nice sport experience.

From the final mountain bikes race of the season CT Author Cup has became a family business. On the Marathon route in the Jizerske Mountains was men category dominated by Jan Škarnitzl, women race won his sister Jitka.

At the start of the 19th year most mass cycling race in the Czech Republic has attract 3,500 cycling enthusiasts. This is the allowed track limit, more riders' can´t organizers let to go, because of nature protect or throughput. In the lead elite professionals were fighting.
Of the seven-member group was separated before finish, the third of this year's European Championships in cross country Jan Škarnitzl with a slight margin he scored. In the end, a lot of tactic was used. Only two seconds behind the winner spurt to finish second Michal Bubílek and third Jiri Novak of Liberec.

Loser of the race was another elite biker Vaclav Jezek. Double winner of this race was attacking on CT Author Cup hat-trick. And maybe he even succeeded if he had not a defect. "Seven kilometres before the finish, I broke the chain and he flew off into the woods. It was impossible to do anything with it, luckily I was brought to the finish, "said Ježek. "I'm not disappointed, it just happens."

Jitka Škarnitzlová winner in the women category admitted, that a 63 km long track gave her a really hard time. "For me, it was very fast. I had trouble to keeping up with someone on the hook, "said Škarnitzlová, who rode most of the race surrounded only by men."The worst for me was the hill from the dam to Hrabětice, it is killer."
At the start there were also famous athletes from other sports. World champion in rowing Ondrej Synek has his last 46th place much improved and finished 17th. "Just before the dam, I lost contact with the leading group and I thought: Mainly not overdid it. It worked and and without cramps like last year, "smiled Synek, who had only 800kms this year.

Legendary hockey goalie Dominik Hasek was much slower - finished on 938th place. "I finished in the first thousand, so I'm happy," said Hasek, who was enchanted with an atmosphere of the race. The oldest participant of Author CT Cup was 77year old Anthony Mottl from Beroun, who finished on 2815th place. 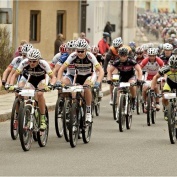 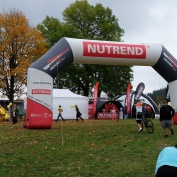 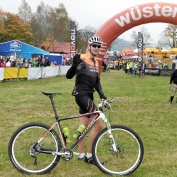 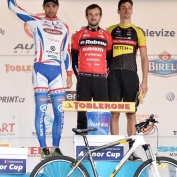 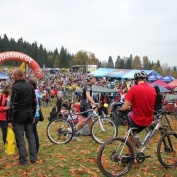