Cool race for all cyclist with the track from Prague to Okoř and back!

The race was started at 10:00 and most cyclists managed to leave in a sunny weather. Raindrops caught up the last stragglers. Competitors might however feel uncomfortable because of mud from a last night storm. So everyone got properly "decorated" with brown freckles on the face and jerseys. For the same reason, there were a few falls.

Although, it is an amateur race and the atmosphere is year after year more than friendly, achieving good results is a matter of prestige. Glass trophy Mayor of Prague 6 Marie Kousalíková for the fastest man of the race in a time of 1: 40: 57.0 went to Pavel Gonda. The finish line he passed just five hundredth seconds faster than Vojtech Jonah, his time has stopped at 1: 40: 57.5. The third man was Michal Kohoutek with a time of 1: 41: 44.0.

Nobody seemed to be surprised that the fastest woman racer in Author fifty Prague 2014 was again, as in the past few years, Kája Polívková with a time of 1: 56: 42.7. She left behind a competitors with a much lower year of birth. The second place among women in a time of 1: 59: 36.7 reached Šárka Černá and third place went to Michael Porazilová with a time of 2: 02: 05.3. One couple managed to go through the race on tandem bike - the director of the gymnasium Nad Alejí Jiri Benda and his blind daughter Anastasia.

During the race, participants had the opportunity to use babysitting; after 50kms a lunch was ready the canteen of Technical University and at the finish everybody could enjoy an accompanying program. For example, try parking the car under the Championship of Safty Parking Show 2014, get some refreshment, to buy or have a good time around partner´s stands this all accompaniment of life music.

Author took care about riders' bikes, service was available for free. Starting number was also a raffle ticket, where could win one of a hundred prizes dedicated by partners even the last rider in the finish.

Author Prague Fifty in 2014, is a part of the Author Marathon Tour, was held under the auspices of Prague Mayor. RNDr. Tomáš Hudeček, Ph.D. and Mayor of Prague 6 Ms Ing.Marie Kousalíková. 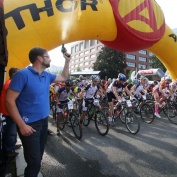 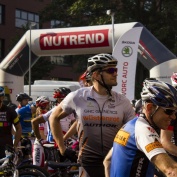 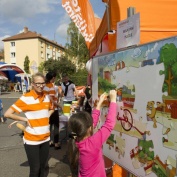 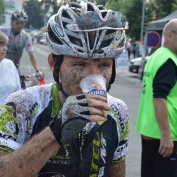 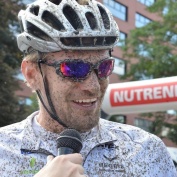 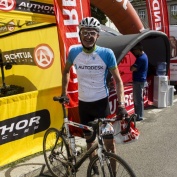 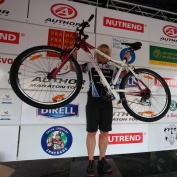 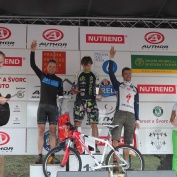