With the gaining of 10th place from New Zealand Ironman returned triathlete Petr Vabroušek. Malenovice iron man reached in the race, which attended in the southern hemisphere in all categories 1,200 athletes from 31 countries on classic tracks 3.8¬ 180¬42.2 kilometres. Peter´s final time was 9:29:19. The winner was Canadian Dylan McNeice (8:37:14) in front of domestic racer Borca Dougal Allan (8: 40: 0, won the bronze medal in Courtney Ogden of Australia - 8:49:46).

Ironman from Malenovice started in small Wanaka town, where this year met the highest quality of competition in the history of the race, standard performance in swimming. ,,Swiming was in neoprene in the local glacial 18th degree lake. From the water I went on the twenty-first position with 11min loss at on a later winner McNeice. „reminisced Vabroušek, who regarding expectations moved forward during cycling.

"The wind was strong on two hilly circuits. At the beginning of cycling was nine degrees. Gradually, however, the temperature climbed up to thirty degrees, "explained cycling conditions in an environment where they filmed a popular film Lord of the Rings, a representative of the club Zlin Author Tufo Trilife. However, he did not go to New Zealand on a trip, but for the triathlon hard work. And because Vabroušek's latest results in the second part of the race were good, so after the bike he was on a 12th place.
Vabrousek was visible also during the final marathon. ,,Run also took place in the hills alternating sand, stone and asphalt. In 30degree heat and bright sunshine, I managed to run down two more opponents and thanks to it was finally the 10th place, "said Petr Vabroušek happily.

But this race pretty hurt. "During this race, I have not had any major crisis, however I felt that after the January training absence caused by sick I missed trained volumes., "said Vabroušek who already attend this weekend on the border of Snieżnik, Rychlebské mountains and Hruby Jesenik race in cross country skiing classical and free technique Ski Tour Jelyman. 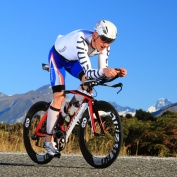